Simple Bitcoin Explanation – The Most Undervalued Asset In Human History 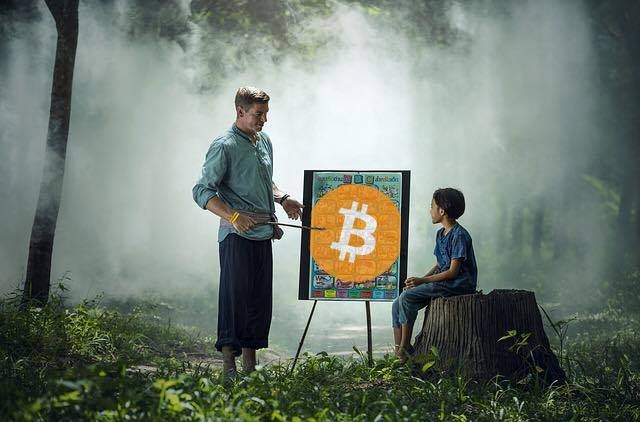 That’s where Bitcoins value is derived from.

That is why, because it was first, it will always be regarded as the ultimate history book.

Bitcoin is digital ownership with a digital transaction record that goes all the way back to the first transaction. Think of it as digital real estate. A Bitcoin does not physically exist in the USA and Germany, but when someone in Germany buys a portion of a Bitcoin from someone in USA, the person in the USA sends the deed/title (key) to the Germans possession due to an agreed upon price on market.

You could also think of it as a car Key and the car is a bank. In order to drive the car(operate the bank) you would need a key. That is the Bitcoin. I’m done with this Key, would you like to buy it?

This transfer of ownership does not require third parties such as states and banks. It is completely voluntary. You cannot be forced to give up your Bitcoin without extreme violence. They could hold a gun to the head of every human on earth and force them to cough up their Bitcoin keys but let us be realistic.

“What Bitcoin keys?” I would ask.

It does not require digital real estate agents licensed by the state. It’s peer to peer. Person to person. A decentralized collective of voluntary networks working together towards the common goal of prosperity.

That Bitcoin is a hectare of land on the digital globe known as the blockchain. The blockchain is the public ledger with all the transactions ever made in Bitcoin. The miners and nodes are the notaries and the currency of Bitcoin itself is the oil (blood) of the network.

Your bitcoin address is much like an email. It is the destination you give someone to send the digital property ownership of the Bitcoin to.

When you get down to the bits of bitcoin, we like to refer them as Satoshis… after Bitcoin’s Creator Satoshi Nakamoto.

Think of a currency as water (current) that runs in a river between two banks. Except with cryptocurrency, there is no need for banks. You are the river bank. Exchanges are the island in the middle which make it easier finding the other side.

Bitcoin is called cryptocurrency because it is secured through a form of mathematics known as cryptography. Banks and businesses use this today to secure money and information. With Bitcoin, cryptography is used to encrypt a wallet (ensure no one can use funds without a password), make it impossible to use another persons wallet, or corrupt the blockchain with malicious transactions. Malicious transactions such as the “double spend” could cripple an economy. It’s a form of counterfeiting where a user attempts to send Bitcoin to two different addresses at the same time. This is made impossible due to miners using cryptography to confirm transactions.

These confirmations are needed to ensure that the transaction won’t be reversed. After about six confirmations, it’s mathematically impossible to reverse them. It means this transaction is etched in digital stone on a digital hectare of the blockchain globe.

Your private key is yours. You never have to give that to anyone. They only ever see your public key when you request or send Bitcoin to other addresses. You can sign your Bitcoin in your wallet to show the world it indeed did come from you. If it’s signed, it is you. The wallet is a piece of software which holds your private keys and makes it easier for the user to engage in the Bitcoin economy.

Miners can vote for or against upgrades to the Bitcoin code. Bitcoin miners check all new transactions and all others to ensure they are true with other miners and nodes. Bitcoin Miners are rewarded by winning a lottery. This lottery is called a block. The block is a bundle of transactions which together get confirmed by miners. The lottery ticket (block), is sometimes won by a pool of people all putting their hashing power together to win the lotto and split the earnings.

It is no coincidence that as difficulty in mining Bitcoin increases, and Hashing Power increases, and the new supply of Bitcoin decreases… That Bitcoin becomes even more valuable. It is supply and demand.  Those who scream “Bubble!” have no true grasp of economics.

Nodes can also vote for or against upgrades to the Bitcoin Code. Full Nodes check all transactions except for the new ones Miners check. If miners chose to use their power (electricity) to overpower the will of the user base, the users can override their vote with a User Activated Soft Fork.

Yes, there is politics in Bitcoin. Except with Bitcoin, you can’t have voter fraud. If you vote. It happened.

Some competing cryptocurrencies have deployed a system known as Proof of Stake. There are many forms of PoS, but generally they all operate as low energy consuming user nodes. This makes each and every crypto user their own bank.

This makes Bitcoin digital oil, digital money, digital real estate, digital banking and digital government. The blockchain is a history book of which the winner of wars cannot rewrite. Imagine that. The very first history book which cannot be written by the victors.

Those who invest and risk early are rewarded compared to the old way where it was “he who killed and conquered enjoyed the spoils of war”. It took centuries to convince people to accept paper over metals… it took people decades to have them accept plastic over paper, but I believe it will be just a few years to convince them to accept the digital blockchain.

There are a lot of currencies that call themselves cryptocurrencies yet have no blockchain. Some currencies are run by anonymous shadowy figures or internet trolls. Others have reversible blockchains and can delete people’s wallet balances if they so wished.

They may have their places in the marketplace and may rise or fall. It’s up to you to put your money where it counts most.

Read Satoshi’s White Paper to gain a clear understanding of why he built Bitcoin.

The real kicker is it’s Bitcoin vs Big Bank Crypto.

Either Satoshi’s Decentralized principles, which gave birth to Bitcoin wins, where no one can take your Bitcoin, or Fedcoin.

“Fedcoin”, which if/when you dissent, they can switch you off from engaging in commerce. Let’s hope bitcoin wins this battle. I have hope.